Product page
Code and schematics
This page as a pdf 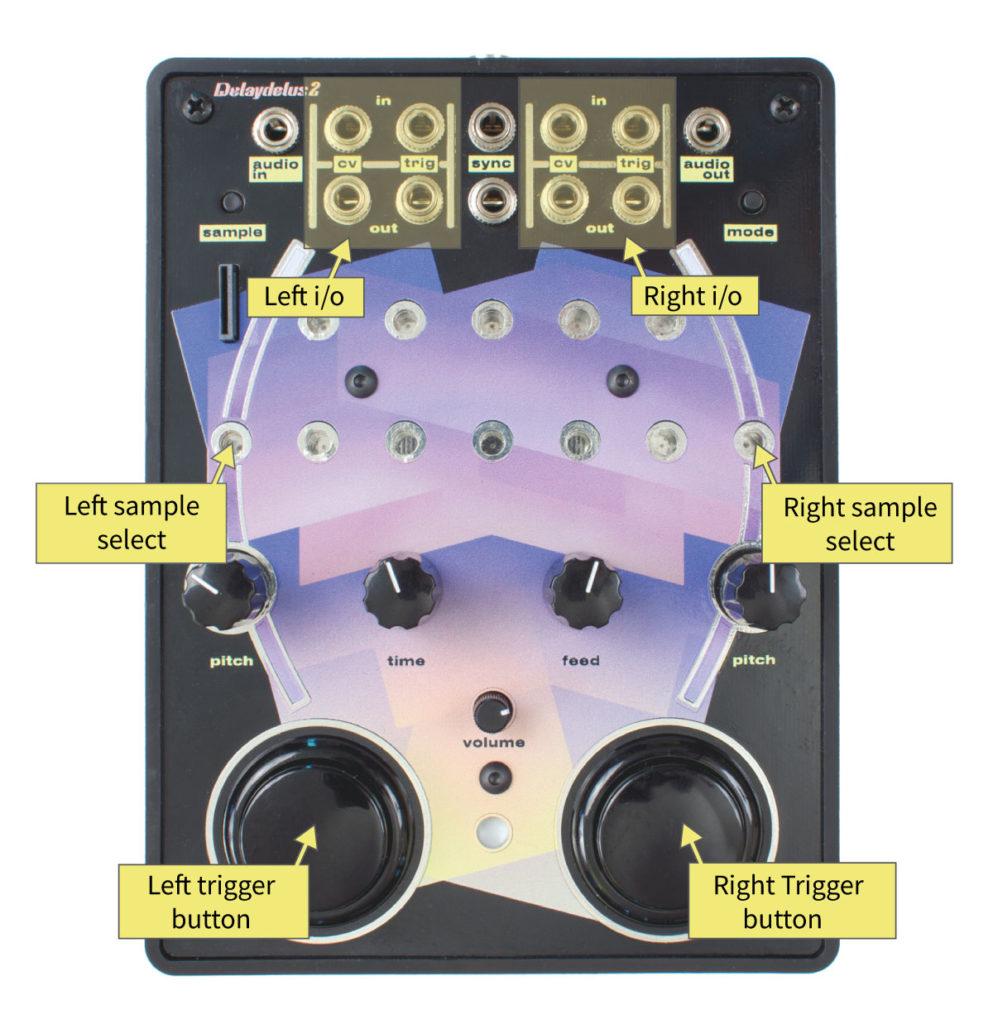 PLAYBACK
The Delaydelus can playback four samples simultaneously using the left and right channels.
Select a sample by patching it to the left or right most banana plug jack.
When the trigger button on the left or right is pressed this sample will play
The rate of playback is controlled by the right and left pitch knobs. When the knob is at 12:00 the sample will playback at normal speed. Fully to the right it will play at 2x speed.
The left side of the knob slows down until about 9:00 where the sample will start playing in reverse, starting very slowly then going to 2x speed when fully turned to the left.
Multiple samples can be selected by connecting the banana patch cables to each other using the holes on their sides.

To save samples a simple update is required. See this guide.

Loading WAV files from the SD card
If a sample is in the root directory of the micro sd card and starts with “1” through “10” it can be loaded into that sample bank in a few different ways.
The SD card must be in when the device turns on. If you remove the card and reinsert it you must reset the Delaydelus. If there is no card in the device when you turn it on or it can’t be read the light will stay white longer and then blink orange for a couple seconds.

Hold mode and sample while the device is turned on. The light will flicker green and white for almost 1 minute while it copies all the files starting with 1-10 it can find in the root directory.
The file name can be as long as you want as long as it starts with 1 through 10. If multiple things start with the same number the one modified last will be loaded.
Any files not starting with 1-10 in the root as well as any directories will be ignored.

Files can be stereo or mono 8 or 16 bit .WAV files. If the file sounds distorted it is probably in 32 bits. Use a program like audacity to save it as a “WAV (microsoft) signed 16-bit PCM”. If a file isn’t 44.1k it will work but will play back at another rate. A 22k file will play back twice as fast

Recording from the audio input

The audio in and out are line level.

Three  playback modes can be selected using the mode button on the top right. Pressing the button will cycle through these modes with the light indicating which one is in use

During audio pass through mode the maximum sample playback is limited to 2. Anything above that will result in distorted output.

1 – Regular trigger mode. – Warm white light
The device turns on in this default mode.
Audio input is muted
Pressing the buttons will trigger the sample, that is start it and let it play to the end, no matter how long the button is held down.

2 – Passthrough mode – Purple light
Audio input plays through the output, going through the delay.
Pressing the button on the left mutes the input and triggers any selected sample

3 – Gate mode – Light blue
Holding down the left button allows the input audio to pass through the device
Samples only play back while the button is held down.

In all modes the light will change brightness based on the audio output level.

Trig In –
Samples will be started when a trigger signal is received on these jacks. In mode 3 the inputs will also act as gates

CV out – Envelope follower
The output from this jack will follow the output level of the sample played on this channel.
The delay time knob controls the follow rate with a very short release when turned left and a long one on the right.
Sends a signal from 0-9V

Trig out –
A 10V gate is sent whenever the channels button is pressed. When a looping sample starts again or a trigger signal is received on the input a trigger pulse is also sent

Sync in – Delay time
Delay time can be controlled externally using a sync signal or any square wave.
After 3 pulses have been received the delay will be set to this new rate and sync mode will be enabled. Just like turning the delay knob the rate will not immediately jump to the new rate but speed up or slow down to get to it.

To exit the sync mode turn the feedback knob all the way to the left then back to the desired level.

Sync out
Pulses will always be sent out of this jack based on the delay rate. 4 pulses are sent per delay time so with a 1/2 second delay 8 are sent per second.

Email drbleep@bleeplabs.com with any questions